Joanne Rouzan Driscoll has represented major law firms and business organizations in litigation and on appeal on important issues involving class action claims and shareholder derivative claims, breach of contract claims, legal malpractice defense, whistleblower actions, public contract bids, products liability claims and personal injury claims. Joanne is an elected Fellow in the American Academy of Appellate Lawyers and has been selected, by peer vote, as a Leading Lawyer for civil appellate law since 2010 and as an Illinois Super Lawyer, Appellate, since 2016. In 2015, she was named as one of the top five women appellate lawyers in Illinois, and she served as President of the Illinois Appellate Lawyers Association from 2016-17. Joanne was the subject of an article in Leading Lawyers magazine entitled “Joanne Rouzan Driscoll: Her Leadership Pays Off for Clients and Peers,” Women’s Edition, March 2015. 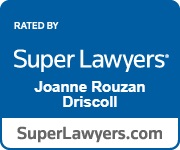